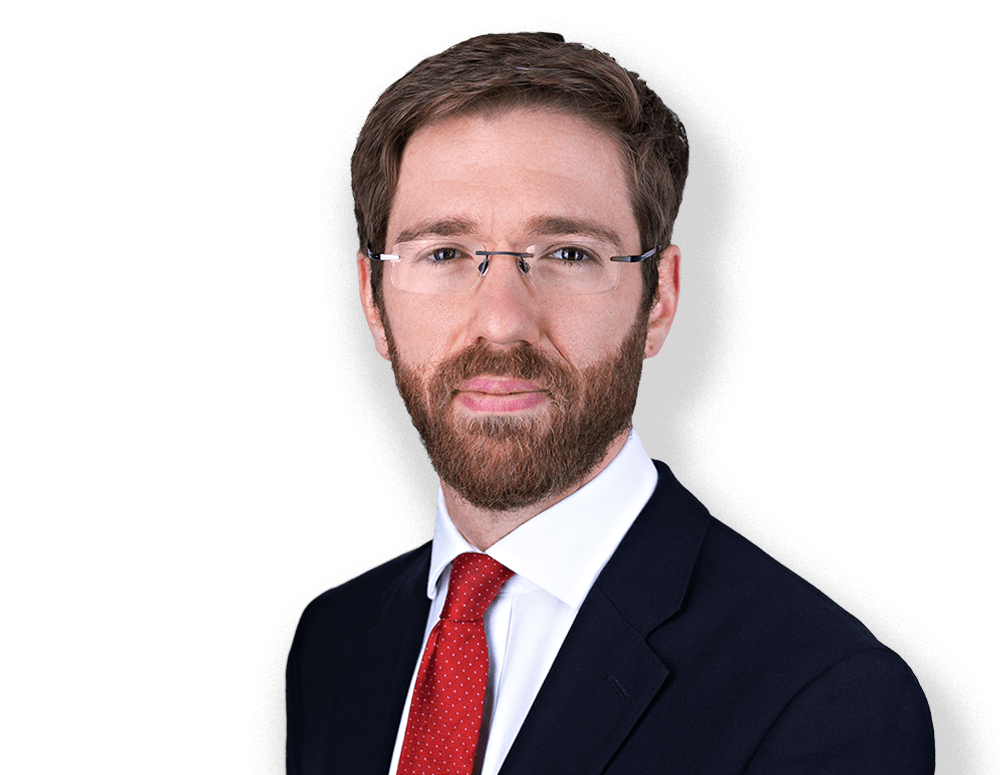 Robert Scrivener has a commercial practice, covering both arbitration and litigation.

He has particular experience in the areas of shipping, energy, construction, professional negligence and banking.

In arbitration, Robert has been instructed on cases being heard under a wide range of rules, including LCIA, ICC, UNCITRAL, HKIAC, SCC, SCMA, LME and LMAA. He has experience of drafting pleadings and submissions as well as cross-examining both factual and expert witnesses in high value arbitration disputes.

In litigation, Robert has acted on cases in the High Court (particularly the Commercial Court and Technology and Construction Court), Court of Appeal and the Supreme Court.

Robert has particular experience working for clients in the Asia Pacific region.

A substantial part of Robert’s practice concerns shipping and international trade, often overlapping with his construction and energy practice.

Instructed for the successful party in the first case to be heard before the English Courts concerning the BIMCO Supplytime 2017 charterparty (The “Atlantic Tonjer” [2019] EWHC 1213 (Comm)).

Acting in a Singapore law governed and seated arbitration concerning the termination of a long term bareboat charter.

Acting for shipyards in multiple disputes with the buyers of new-build vessels. Issues typically concern delay, defects and claims arising under guarantees.

Making an application for an emergency injunction under s.44 of the Arbitration Act in a series of charterparty / bill of lading disputes following the failure of a vessel’s main engine whilst at sea.

Instructed in a dispute about the sale of iron ore. The case concerned the applicability of the contractual force majeure provisions in light of changes to PRC environmental legislation.

Acted in arbitration proceedings concerning the delivery of new-build vessels from a Korean shipyard.

Advised on claims to be brought by way of ICC arbitration on damage sustained by a vessel during dry dock.

Advised on the recovery of SCOPIC costs under an LOF.

Advised on the service of High Court proceedings under the Service Regulation and Hague Convention in the context of a cargo claim.

Multiple disputes following the loss of deck cargo from vessels during transportation.

Acting on various claims concerning the non-payment of hire, freight and other sums under time charterparties, voyage charterparties and contracts of affreightment.

Advised on the enforceability of judgments in England and Wales when they have ceased to be enforceable in their originating jurisdiction.

Disputes arising from the insolvency of OW Bunkers.

Acted for the successful Chinese state owned shipyard in proceedings concerning the construction of platform supply vessels, resolved by way of HKIAC proceedings and governed by Hong Kong law.

Robert has a broad experience of energy related disputes.

Acted as part of a legal team on a +USD 500 million LCIA arbitration between an oil company and a well-known European oil major.

Acted for the successful Chinese entity in a +USD 500 million LCIA dispute about the development of Kazakh oilfields.

Acted in an LCIA arbitration concerning the alleged mismanagement of a floating and production unit (FPU) off the West coast of Africa.

Acted for a Chinese SOE in an arbitration concerning the alleged misuse of confidential information relating to petro-chemical technology used in the construction of a plant.

Acted for a Korean contractor in an LCIA arbitration about alleged delays and defects in the construction of oil / gas processing equipment.

A dispute concerning the loss of drilling equipment in a North Sea oil / gas project.

Acted for the successful Chinese state owned shipyard in proceedings concerning the construction of platform supply vessels, resolved by way of HKIAC proceedings and governed by Hong Kong law.

Advising a Chinese SOE on multiple disputes arising from a solar project in the Middle East.

As sole counsel in a Hong Kong arbitration, governed by PRC law, concerning the sale of petrochemical equipment.

Drafted pleadings in a high value offshore energy arbitration under UNCITRAL rules. The case concerned the construction of an oil platform and associated facilities off the West coast of Africa.

Acted in a Singapore law governed arbitration about the adequacy and safety of computer equipment for use on saturation diving vessels.

Robert undertakes construction and engineering disputes involving litigation, arbitration and adjudication. He has acted in both domestic as well as international cases (the latter generally having an energy or offshore construction element).

Robert is a TECBAR adjudicator.

Acted for a contractor in +USD 500 million confidential ad hoc dispute resolution proceedings concerning the construction of infrastructure in a major city in the Middle East.

Advised on the delay and LAD provisions for a substantial residential development in central London.

Acted for the main building contractor in a multi-million pound final account adjudication arising out of the construction of a landmark London building.

Acted as sole counsel for the successful contractor in M. Davenport Builders Ltd. v Greer [2019] EWHC 318 (TCC), a case which raised a novel point of English law on payment obligations under construction contracts.

Disputes about cladding and compliance with Approved Document B.

Acted for a developer against a building contractor in relation to a wrongful termination dispute.

Various claims against architects and other professionals in connection with construction projects.

Robert has experience of a wide range of commercial and contractual disputes, both in litigation and in arbitration.

As well as being instructed to appear in arbitrations he is also often engaged to advise on points of arbitration practice and procedure. He has previously been seconded to the International Arbitration department of a leading City firm.

Appeared in LCIA proceedings concerning alleged misrepresentations and breaches of contract in connection with a USD 20 million lending agreement and collateral guarantee.

Advising on an application to stay litigation under the Arbitration Act 1996.

Acted as sole counsel in Commercial Court proceedings about the accounting of marketing revenues between two parties to a partnering agreement.

Applications for security for costs in the context of arbitration proceedings.

Advised a major telecommunications provider on the prospect of obtaining an emergency interim injunction in the context of a contract termination dispute.

Advised on and drafted pleadings in a claim under LCIA rules following a fire at a PFI building.

Acting as part of the legal team in a ss.67 and 68 Arbitration Act challenge arising out of a partial final award in LCIA proceedings where a 9 figure sum was in issue.

Advised on the applicable law of an arbitration agreement, as well as the res judicata and issue estoppel implications of foreign court judgments on a London seated arbitration.

Advised on the application of the Cross Border Insolvency Regulations to a London arbitration following the commencement of Korean insolvency proceedings.

Instructed in a dispute concerning the enforcement of international arbitration awards and the application of s.103 of the Arbitration Act, as well as the grant of a freezing injunction.

Robert has experience of a wide range of professional negligence actions. These have included claims against construction professionals such as architects and engineers. He has also been acted in disputes concerning lawyers, accountants, surveyors and valuers. He acted for the successful appellants in the Supreme Court in what is now the leading case on the causation of loss in valuers’ negligence actions (Tiuta International Ltd. v De Villiers [2017] UKSC 77).

A claim against auditors for failing to detect fraud.

Claims against solicitors for failing to correctly advise on the termination provisions of partnership agreements.

A claim against accountants for allegedly improper and negligent advice.

A claim against a legal professional alleged to have taken significant sums of money from the claimant.

Acting in threatened proceedings against an insurance broker involving allegations of fraud and secret commissions. The case raised various issues about a broker’s right to deduct brokerage and also the obligations of fiduciaries in respect of commissions.

A claim against structural engineers for providing allegedly negligent advice and calculations.

Robert has been involved in a number of banking and financial services matters.

Instructed in Commercial Court proceedings brought by the investors in a collective investment scheme against the fund’s operators, the claim itself giving rise to alleged breaches of the promotion rules in COBS, as well as issues about the correct interpretation of s.138D of the Financial Services and Markets Act.

Mis-selling disputes, including being instructed to settle defences in proceedings involving the alleged mis-selling of interest rate hedging products, mortgages and PPI.

Claims under the Payment Services Regulations.

Being instructed by a major high street bank to advice on whether the procedures by which it closes its accounts complies with its regulatory and statutory obligations.

Appearing on behalf of a bank in High Court enforcement proceedings concerning a judgment debt worth c.£7 million.

Acting, as sole counsel, on behalf of a primary lender in a claim concerning an alleged negligent misstatement to a secondary lender, said to be worth around £4 million.

In this edition of our International Arbitration Newsletter, Robert Scrivener considers the 2020 update to the LCIA...

In the latest edition of our International Arbitration Newsletter, Robert Scrivener focuses on two recent...